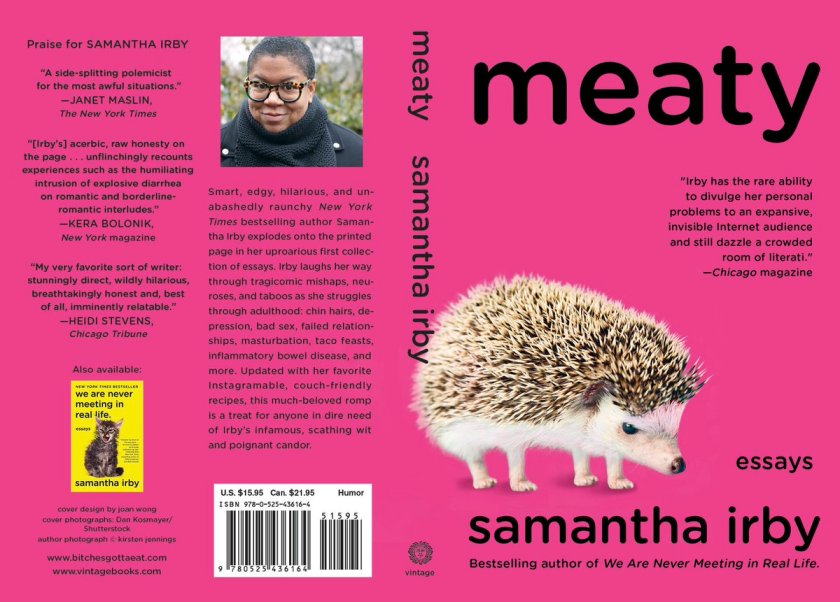 I just finished listening to the audiobook of Meaty by Samantha Irby. She is hilarious.

It was wonderful to listen to in my car last weekend when I was driving by myself out in the mountains. It was slightly uncomfortable to listen to sitting in traffic with my windows open the next day though because, like all the best people in the world, Samantha Irby curses like a goddamn sailor and she talks about a lot of gross shit — especially shit, since she suffers from Crohn’s disease and has serious issues with her digestive tract. She talks bluntly about diet and sex and growing up taking care of her mother. I don’t think I’ve ever met anyone like Irby and I love that.

She’s got a great interview in the New York Times today — here’s my favorite part:

[What’s] the last book that made you furious?

“The Girl on the Train.” I read it because everybody else read and loved it, plus I’m really into Emily Blunt, and halfway through the book I was like “WHAT.” Homegirl was infuriating! Literally why did she keep going back to that house?! Is this the kind of thing where Americans say we like something even though it’s terrible because we don’t want to look dumb because British people made it? I was rooting for her to die the entire time.

HAHAHAHAHA! I love this. Girl on the Train was an awful awful book, I totally agree. But I couldn’t have said it quite like that.

PS: If you’re a fan, you should go back and read her earlier book of essays called We Are Never Meeting in Real Life. So funny.